Back in 2021 when I started this project the firmware on the hubs was 2.43 and it didn't check the certificate of the hosts it was connecting to so it was easy to poison the DNS and the hub would just connect to PetHubLocal. A few months after I published on the Home Assistant community about building PetHubLocal SurePetCare released an updated firmware version 2.201 a notable change on this was now the hub DOES check the certificate. I am not sure if I had anything to do with that change.

If you want to use PetHubLocal you will need to be running firmware to 2.43.

Checking your firmware version from the config

If you check the pethubconfig.json once the configuration is built under the hub serial number you will have the firmware version in there.

Or from the app API response to https://app.api.surehub.io/api/me/start which is retrieve by the app

If your Firmware above is not 2.43 and 2.201 or anything higher then you will need to flash on the older firmware to make it work. Thankfully I have made this as straight forward a process as possible as during the setup when downloading the current firmware from SurePetCare the script finds the XOR key for that firmware as the project includes the DeXORed 2.43 firmware and builds a hub specific image with the XOR key just found.

After the configuration is built using pethublocal setup the current directory should have two groups of firmware images:

Where H0xx-0xxxxxx is your Hub Serial Number and 2.43 version of files is the custom firmware built to your Hub, and 1.177 is what was downloaded from SurePet and then the XOR key found as 1.177 is the version of the bootloader on the hub, which I hope SurePetCare don't upgrade to lock me out of doing this

The Hub requests the firmware over HTTP on port 80 to hub.api.surehub.io so we are in luck as it doesn't check the certificate and will download fine from PetHubLocal... hence why we can downgrade and upgrade without the issue of the need to validate a Certificate over HTTPS.

If you unplug the power for the hub then hold down the reset button underneath the hub and plug it back in again and release the reset button when the ears are solid red as then the hub will download the locally built firmware from hub.api.surehub.io which is pointing to your PetHubLocal right?? PetHubLocal checks the local directory based on the Hub Serial Number and serves up the already built version 2.43 if the H0xx-0xxxxxx-2.43-nn.bin files exist.

The upgrade / downgrade takes about 5 minutes so just leave it alone.

It’s REALLY important you don’t interrupt the firmware process as I don’t want you to brick your hub, and with everything you are taking this risk on yourself if things go wrong… which I have tried as hard as I can to avoid anything going wrong.

Roll back to SureFlap supplied firmware

Again it's really important not to interrupt the firmware update process as you don't want to brick the Hub.

So, the folks at SurePetCare have been busy and built a completely new version of the hub called the "iHB v2" I have not seen one in the wild but it is on the FCC Website

My photos of the V1 Hub: 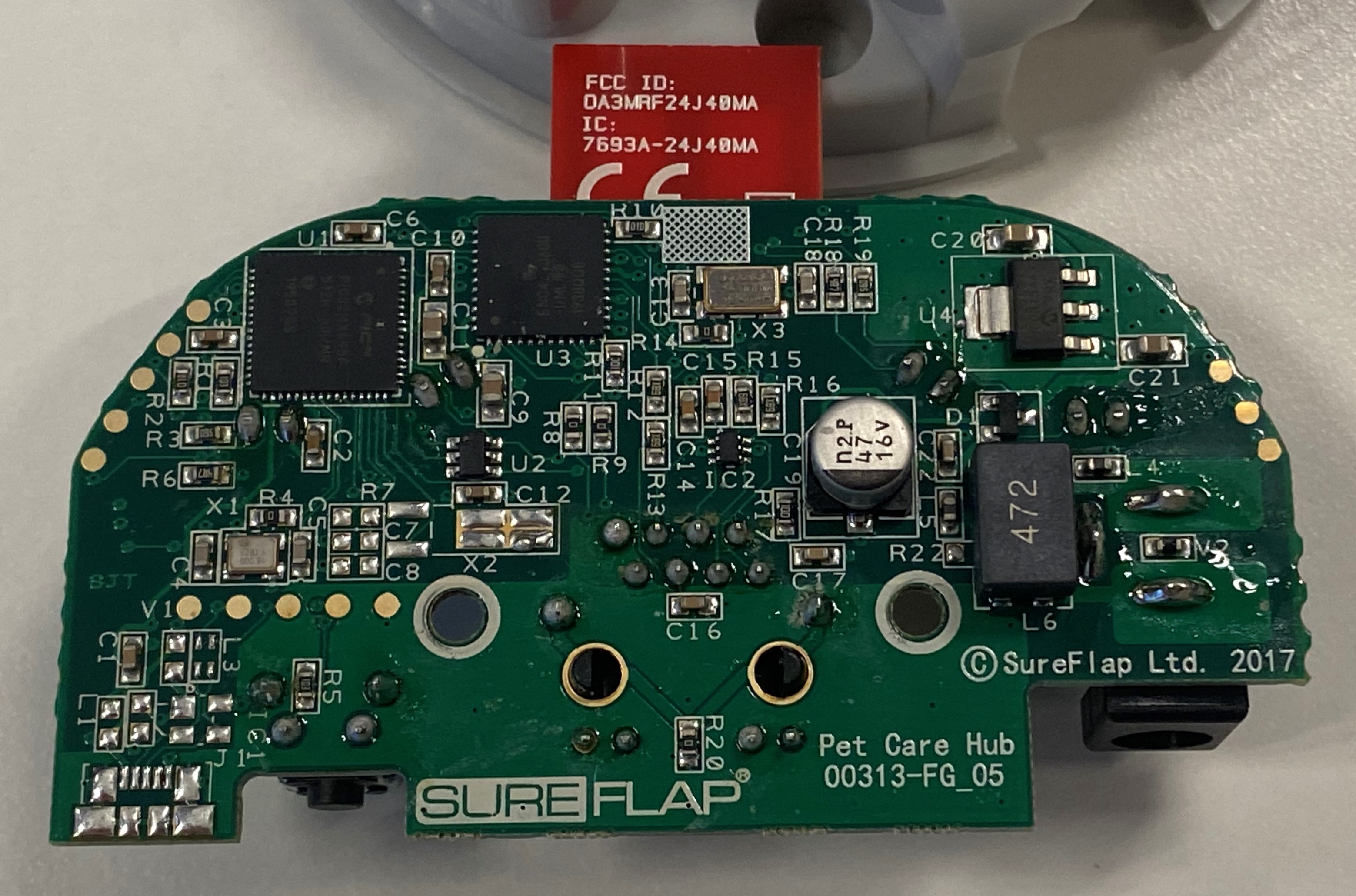 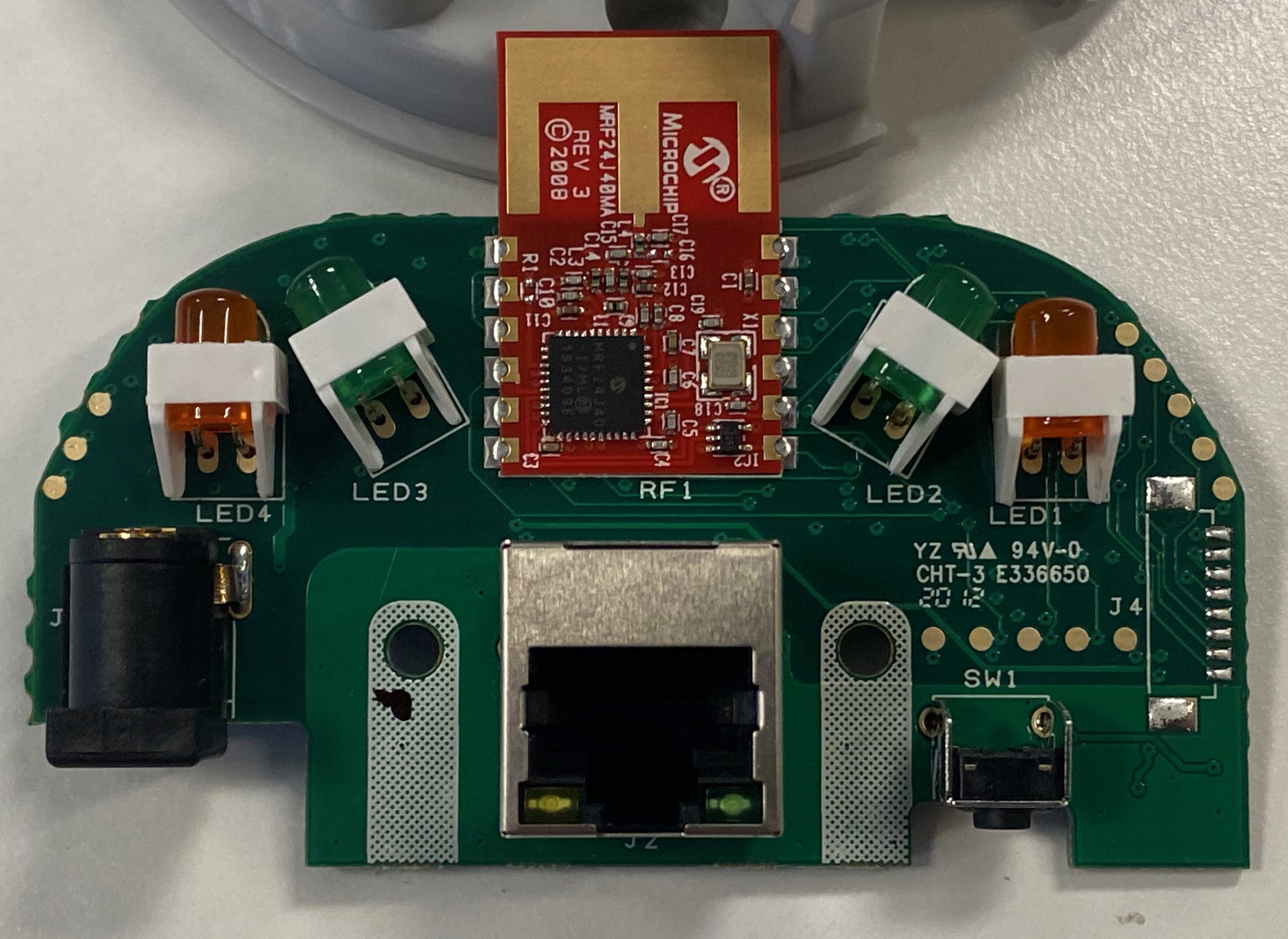 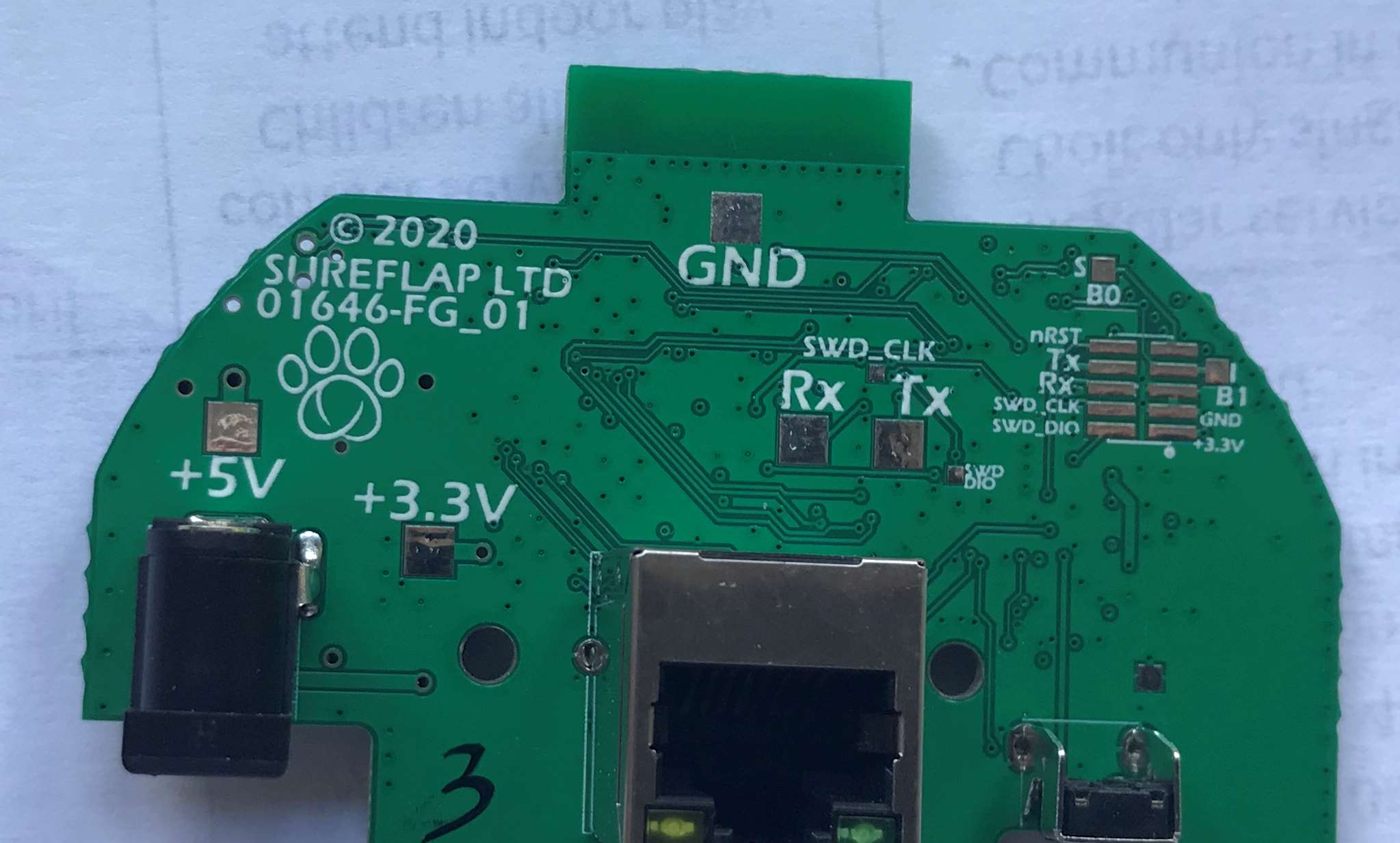 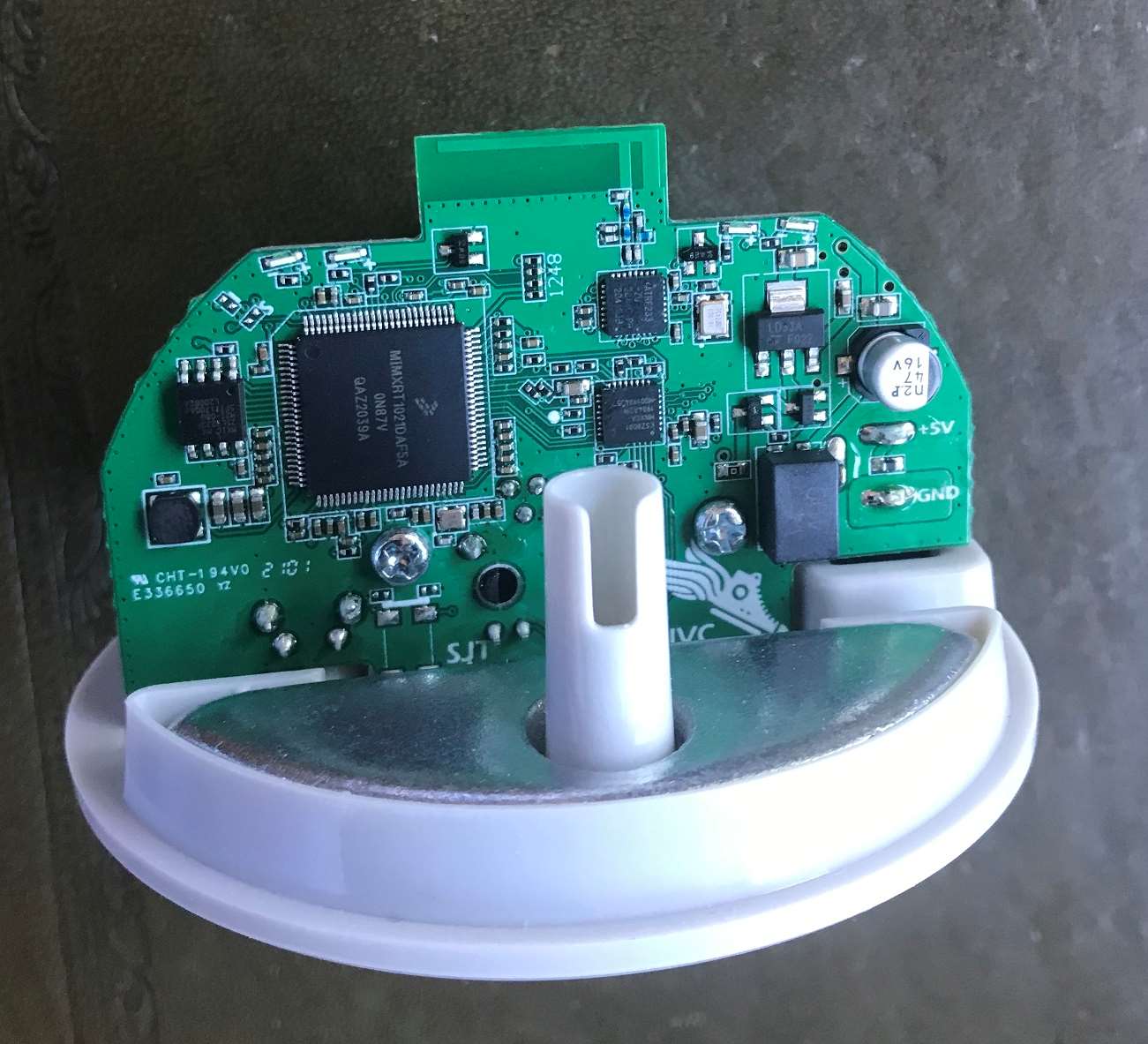 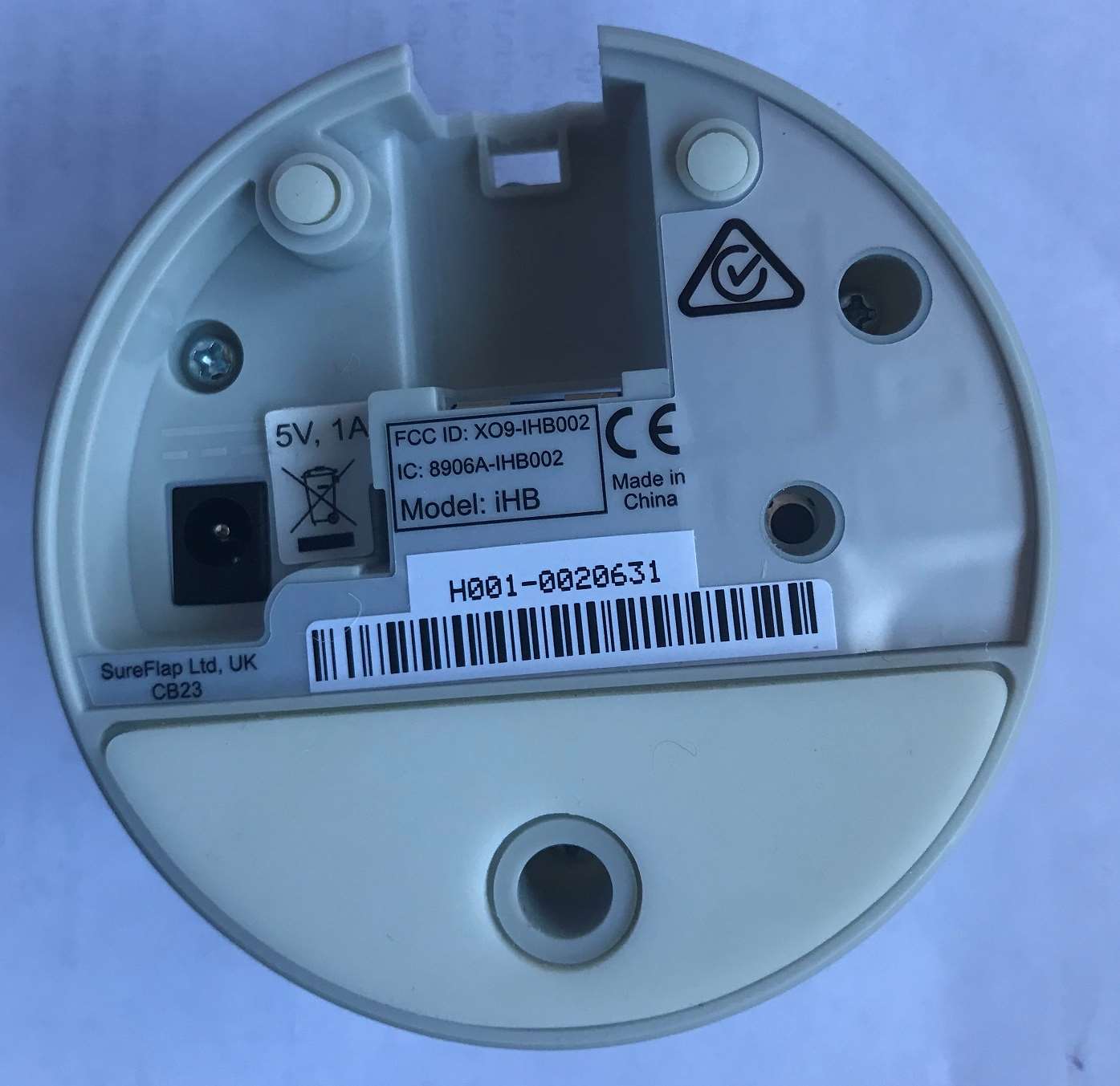 So all bets are off with this if you have one.